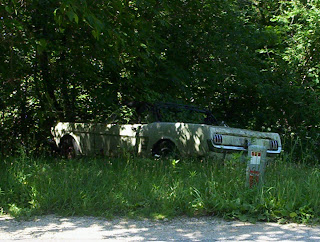 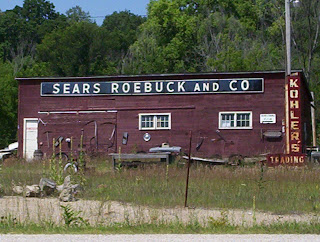 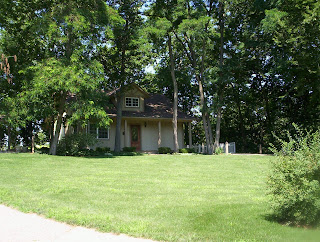 Hmmmm. Wish I were going here this autumn, because it's quiet, and the changing leaves are so beautiful...

Alas, this is not in the cards, for now.

On the upside, I'm back on my 20 lines a day kick--more or less--so I'm hoping to have a few more "submittable" pieces on file.

It's all about persistence.

Still, I can't help but think a vacation would feed the creative spirit.
Posted by Susan at 10:40 AM No comments:

Prepare yourself. It's time for a feminist rant. Again.

I think the recent media frenzy over Britney Spears' MTV music awards performance exposes our cultural fascination with the state of women's bodies. I must say, I was especially disturbed to read the all the "Britney looked fat" comments--and I'm not talking about bloggers and such, I'm talking about the AP articles, the comments by so-called journalists...It seems to me as though you can't walk through a supermarket without being inundated with headlines about women's bodies, especially celebrity bodies. It's always about who's "fat" and who's "scary skinny," or who's lost weight, gained weight or is sporting a possible "baby bump." (Oh, the baby bump phenomenon...that's a rant for another day!)

Now, I'm no fan of Spears, and as a general rule, my response to celebrity articles is something along the line of "who cares?" but it seems utterly ridiculous to be talking about her body in the press. This woman had two children. Recently. And frankly, she looks okay to me, but I'm not obsessive about weight. At least, I try not to be in a culture that practically demands that women be distracted by the shape of their bodies.

And I think it's important to note that the bodies of male celebrities are rarely subject to the same kind of scrutiny. I mean, if somebody like John Travolta or Richard Gere start to look a little paunchy or bloated, they don't make the cover of five magazines because of their weight. Nobody speculates that male weight gain (or loss) indicates some kind of impending emotional breakdown.

Why is it that women are rarely given the same kind of attention for their talents, their good works, or their character, that they receive for their bodies? I'm just wondering.

It seems as though we being told that our value resides in the shape of our bodies, in whether or not we meet some standard of "desirability." Perhaps this is because there's money to be made by savaging women's self-esteem. Quite a lot of money. The weight loss and plastic surgery industries have something to gain by making women feel bad. It's all about the $$$.

For example, whenever I am unfortunate enough to stumble across one of those reality tv plastic surgery shows (i.e. "Dr. 90210") they always seem to depict some flaky mother buying her sixteen year old daughter a new, (and bigger, always bigger) set of breasts. Why breasts? Why not a college fund? Or piano lessons? Or a trip to Europe? What does this tell a child (and make no mistake, sixteen is still a child, folks) about her value?

Now, I don't have a daughter, so maybe I'm missing something. But I doubt it. Besides, I have two nieces. I worry about how this kind of thing will affect them someday. Of course, they are lucky enough to have smart, sensible parents, who would never think a set of breasts makes a great "sweet sixteen" present.

Still, I think it's a brutally difficult thing, to grow up female in a society so focused on women's bodies and so utterly disinterested in the state of our souls.
Posted by Susan at 7:34 AM No comments:

I--of course--had plans for making this Monday productive. I was going to go to pilates class. I was going to do some writing. I have a couple of websites that need updating. Today was NOT supposed to be a waste.

I don't know if I pinched a nerve in my neck or what, but I developed one of the worst headaches of my life by about 8:30 this morning. It felt like someone had driven a knife into the base of my skull, all the way into the back of my eye. Ugh.

So I took a couple of maximum strength Tylenol and lay down on the couch. That was pretty much my day.

1. Like many bloggers, I spend WAY too much time online. Seriously. Of course, I like to think of it as a fieldwork exercise, studying cyberculture for some future writing project or some such thing, but really, I think I might just be cyberslacking ...

2. I haven't worked out in two weeks. I feel mega-guilty. Maybe tomorrow.

3. I was going to tackle some laundry this afternoon, but I just couldn't do it. Here's why: 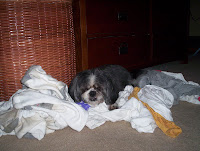 He just looks so comfy.

4. I have an overwhelming desire to engage in some serious virtual book-shopping. There are so many poetry books I'm dying to read...Adding things to the wish list is satisfying, but not nearly as satisfying as when I find a box from Amazon on the porch.

5. I have no desire to study for the GRE. I've decided I'm not taking it until next year, if at all. Eff it.

6. While I wrote this up primarily for sh*ts and giggles, I like my moody writer bio so much I'm considering changing my blogger profile.

7. While I got up at a reasonable hour this morning--generally unheard of on a Sunday! At least for me--I lay about on the sofa watching The Host and eating rice krispie treats until about 10:30. I can't think of a better way to be completely unproductive.

8. I laid out my cards this week, and the King of Swords appeared. Again.

This is the fourth time in a row. Obviously, I need shift gears, and be more assertive in pursuing all this *stuff* I'm trying to achieve. I'm feeling overwhelmed, though.

Tomorrow, I will NOT bum around. I swear.

But you have to admit, sometimes it's just necessary.
Posted by Susan at 3:31 PM No comments: Check out this bad boy. He's been living on my front porch for the last couple of days. I finally got up the courage to take a picture.

You may not be able to tell from the digital photo, but this praying mantis is HUGE. I mean it. I think he's about the size of my forearm.

Of course, it could very well be a "she" rather than a "he."

But I don't intend to get THAT close!

The bugs REALLY are taking over...
Posted by Susan at 1:38 PM No comments:

figuring out my life with blogthings:

What Type of Writer Should You Be?

What Advanced Degree Should You Get?

The Quick and Dirty Career Test

Should You Go To Grad School?

Whew! I'm exhausted just thinking about it...
Posted by Susan at 11:42 AM No comments:

I have quite a few things in limbo already (Does anyone else hate the "not knowing" *almost* as much as rejections, if not perhaps a little more?)..at least with a rejection slip, you know somebody read your work, even if they didn't like it!

(That said, I'll try my best to be prompt in replying to submissions to blossombones!)

I try not to get antsy, but I can't help it.

I figure the best way to deal with it is to send out more stuff! I think I'll brainstorm a list of journals today...especially those whose submission periods are just opening up for fall.

On a related note, the King of Swords has figured prominently in my last few tarot readings, so I know that action is called for, rather than contemplation. I also need to be less emotional about my work, and more logical/intellectual about the overall game plan...

I feel compelled to post again today, primarily because the wasp photograph is making me a little nauseated. Said photo must be pushed a bit down the page, so that I don't have to look at it next time I sign in.

Yes, I really am that phobic.

Having survived my brush with terror (or at least, with a terrible insect) I think it's time for a little gratitude list :)

Today, I am grateful for the following:

2. the latest issue of Bitch magazine, which arrived in the mail yesterday. (It's brilliant, as always.)

3. the wonderful writers who contributed work to the first issue of blossombones. (The ezine will debut in January of 08!)

4. my super-fabulous co-editors, Melissa and Missy. (You grrls rock!)

6. grad schools that don't require one to take the GRE...

7. horror movies on deck for this evening: Dead Silence and Audition. (I've been wanting to see Audition for ages...but from what I've heard, I should probably approach my DVD frightfest with an empty stomach...)

8. the approach of Autumn--my favorite time of year.

9. my family--who always make me laugh, even when times are difficult.

11. according to my horoscope (found every month on the best astrology site on the web--Susan Miller's AstrologyZone), there are positive changes afoot! (much needed for this tired-out Aquarius...)
Posted by Susan at 6:01 PM 2 comments:

when I say wasp, I mean insect, folks...

I'm talking 6-legged, winged, flying, stinging critters. NOT people. Really. It never even occurred to me that anyone should think otherwise...

I suppose one of the dangers of blogging is being misunderstood!

I shall consider the multiplicity of interpretations for any and all entries from here on out...
Posted by Susan at 10:26 AM No comments: