I'm hoping to have the winter issue of blossombones up and running by Monday, at the latest. We'll be featuring Molly Gaudry's digital chapbook, Anatomy for the Artist.

I'm slogging along, moving slower than I plan (as always), so just in case I'm running a few days late (our new reading period begins on Monday, February 1st), I'd like to preview our latest call for submissions:

Call For Submissions: The Freud Issue

Blossombones is seeking submissions of poetry, short fiction and critical prose that represent a feminist or woman-centered response to the work of Sigmund Freud, with particular emphasis on alternative models of the psychoanalytic process posed by women.

We ask that women only submit work for the summer 2010 issue.

The Freud Issue will be guest-edited by Kristina Marie Darling.

Kristina Marie Darling is a graduate of Washington University. She's the author of several chapbooks, including Fevers and Clocks (March Street Press, 2006), The Traffic in Women (Dancing Girl Press, 2006), and Night Music (Blaze Vox Books, 2008). A two-time Pushcart Prize nominee, her writing appears or is forthcoming in issues of The Gettysburg Review, The Boston Review, Shenandoah, The Colorado Review, and other periodicals. Awards include residencies at the Vermont Studio Center and the Prairie Center of the Arts, as well as a scholarship from the Squaw Valley Community of Writers' annual poetry conference. Her website is KristinaMarieDarling.blogspot.com.

All other general queries regarding the journal may be sent to editor Susan Slaviero: susan.blossombones (at) gmail (dot) com

Our general guidelines still apply: simultaneous submissions are fine, no multiple subs during a single reading period, and please query our guest editor if you’re considering sending a longer piece. We expect a few longer pieces will be published in this issue, as we’re interested in critical as well as creative work.

The summer issue should go live sometime around July 1st. Don't forget to submit your work on or before April 30th.
Posted by Susan at 12:19 PM No comments:

Lately, it's been this thing that I just can't get to so often.
Last night I had a dream that I showed up late for a reading and forgot to bring any poems. I tried to write down what I remembered of the pieces I intended to read, but they were all screwy and I was quite terrible. I recall beginning one poem with "It is said I am the husks of rabbits," which seems rather grotesque to me upon waking. Mike has suggested I type a few favorite pieces into my phone so I will never find myself in this situation, which I find funny. Reading poems from my phone would make me feel like a total d-bag.
I think I need to take a bit of a web hiatus, as I believe such things as Facebook are hurting my productivity. Really. It's so easy to get sucked in to just browsing around, and the next thing you know, an hour's gone by and you've accomplished absolutely nothing.
Also, I just can't get into Twitter. This is probably for the best. I tweet about once a month. I know that's pretty lame. I should probably delete my account, but I keep thinking I'll use it more at some later date. I probably won't.
Anyway, I have decided it's time to order some books & chapbooks I've had my eye on... I'm hoping it will inspire me to write, but at the very least, I know I will be delighted just to read something beautiful. I have a bit of poetry $ set aside, so maybe I'll buy some goodies today. I suspect it will lift my spirits. Of course, I want more books than I can afford, but who doesn't?
***
Poetry aside, I've been very pleased with how much better I feel by avoiding processed foods and cutting back on meat consumption. My energy levels are much improved, and my other (numerous) health issues much less troublesome. It is somewhat time consuming and requires quite a bit of planning, but it's very, very worth it. I'm also a size smaller, which is a nice bonus. I will probably never be particularly petite, but I don't mind. It's nice not to wake up feeling like I've been hit by a truck. I'll settle for that, really.
It's funny, but for the longest time, I would try to lose weight by eating frozen "diet" meals and drinking diet soda. I thought I was being virtuous, but I felt like total crap. I'm not sure why it took me so long to figure out how bad this stuff was for my body. I think we're conditioned to view anything labeled "diet" as "healthful." It's good to stop and question your assumptions once in a while, eh?
***
Okay, so I am officially declaring myself on Interweb Hiatus for one week. (Yes, I'm still going to check my email.) It will be interesting to see what I might accomplish...
Posted by Susan at 6:43 AM 1 comment: 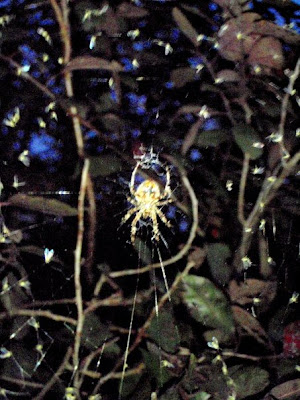 Last night I dreamt I was breeding deadly spiders in my basement. They began as small, round dots of black paste that I dispensed from a tube. Later they developed sticky white cocoons around them. I kept moving the box of spidery critters from once place to another, trying to keep them from escaping once they emerged from their cocoons, as they were (apparently) quite poisonous. I realize this is not entomologically correct.

So anyway, I looked up "spider" in my dream dictionary:

"The image of an artistic or aesthetic person. One's own dark side. Intrigues are planned."

Also: my DD didn't include an entry for "cocoon" (too obvious?) although it does describe the meaning of "cocoa." Say what?

Neverthless, it's clearly symbolic of transformation, although this dream had more of a sinister, Alien-like quality, as opposed to the ususal sparkly butterfly wing sort of business.

I suppose my inner artist is due for some kind of dark transformation. I haven't been actively writing, what with the holiday season and various pressing tasks on my to do list. Really, it's been weeks and weeks, which leaves me feeling vaguely bummed out. My subconscious is now poking me in my sleep with creepy reminders to get back to it, I imagine.

Also: does anyone else try to write mulitple blogs? Is it better to just jam all this random stuff into one online space? I'm so fond of organzation and like to compartmentalize my stuff, but really, I think I'm about to be swamped over the next few months (if I'm lucky), and I want to simplify....

I'd like to do more with the blossombones blog, like chapbook reviews, and listing new publications by previous and current contributors. I wonder if this is realistic...

As for my food blog, maybe I should just ramble on about things like quinoa and sweet potatoes here... No?

I am probably trying to weave too many webs at once, and it's making me buggy.
Posted by Susan at 8:10 AM No comments:

I'm sludging through the post-holiday funk that inevitably follows the holiday blues. It's probably just the chill and the grayness and the sleeping too late that make me feel so sluggish. January should be busy with editorial stuff & (hopefully!) a few other projects as well.
I'm planning to dedicate as much of this week as possible to working on the winter issue of blossombones--Molly Gaudry's digital chapbook Anatomy for the Artist. Wonderful stuff! Can't wait to go online, which should be in a few short weeks :) Also, we've got an exciting new call for submissions for summer, which I'm going to post shortly.
Hint, hint: think eros & thanatos, psychoanalytic theory, towers & cigars (heeheehee).
We're super excited to have Kristina Marie Darling guest editing for summer! Details are forthcoming...
Well, I must finish deconstructing Christmas today. I dislike this part, but tend to feel relieved once everything is packed away for the year and the all the furniture is back in its rightful place. Maybe I'll manage a pot of soup today too. It's a good day to make soup. Here's hoping 2010 is happy, productive and busy!
Posted by Susan at 12:42 PM 1 comment: