A bit of Halloween poetry...

One of my newer pieces, "Origin Story" is up at the very cool journal (with perhaps the most awesome name ever!), Spooky Boyfriend.

I am especially excited to be among some of my favorite blossombones contributors--Juliet Cook, Donora Hillard, and Nicole Cartwright Denison!!
Posted by Susan at 9:28 PM No comments:

I don't live in California, but I think what's going on there is indicative of a larger problem with discrimination in this country. Since when do we legislate against one person's right to love and make a commitment to another?

Just wanted to mention that I think this world could use a little more love, and that I absolutely support marriage rights for everyone.

Hope you all feel the same. If you live in California (or anywhere else that's trying to discriminate against the LGBTQ community) please show your support of marriage rights for all on election day!

From the reading last weekend at Woman Made Gallery... 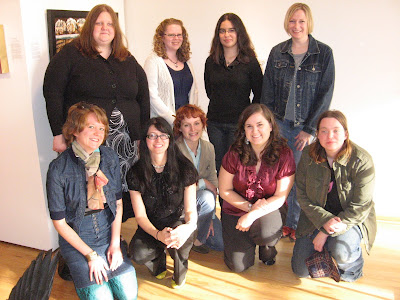 What an honor to read with such a fabulous bunch of women poets! More pics are up at Switchback Books.

I'm spending the next couple of weeks designing the fall issue of blossombones...We've got three absolutely beautiful digital chapbooks going up next month, and I can't wait for them to go live!

Somewhere in there, I hope to get back to reading submissions for winter 2009--The deadline is November 1st, so if you're planning to submit, please do so sometime next week...We'll likely close down for subs in the next couple of months, and re-open submissions in February, for the spring issue. We're going to have two reading periods: August 1st-November 1st and February 1st-May 1st. Hopefully, this will help us stay organized and keep blossombones from getting backlogged with submissions.

Hope everyone is enjoying autumn!
Posted by Susan at 10:26 AM No comments:

This Sunday at Woman Made Gallery

If you live in or around Chicago, please pay us a visit!

Hope to see you there.
Posted by Susan at 7:34 AM No comments:

On a more serious note...

I noticed both Obama and McCain talking about meeting the needs of children with autism in the debate last night. Not extensively, but in passing--more or less.

Yes, autism is on the rise...and as McCain clearly has been told by his campaign advisors, parents of children with autism vote.

When McCain promises me that Sarah Palin "knows about autism," I am profoundly unconvinced. Yes, she is the mother of an infant with Down Syndrome, but that does not make her an expert on all (or any) disabilities. She's been the parent of a special needs child for what? Fourteen months? I've been doing this for eighteen years. (Perhaps this qualifies me to be vice president. I can't see Russia from my house, but I can find it on a map.)

Barack Obama has it right when he says what is needed is funding, and this "spending freeze" proposed by John McCain will hurt education, including special education and early childhood services.

I'd also like to mention that children with autism grow up to be adults with autism, and I NEVER hear politicians talk about that. Never. Ever.

Let me say this again: Our children aren't magically cured when they reach the age of 21. Nor do they disappear or cease to need support in the community.

As if this transparent attempt to get me to vote for people who--in my opinion--do not care about women and children isn't bad enough, I came across this piece of garbage from Denis Leary today. His comments are so horrific, I'm practically speechless.

But of course, I don't remain speechless for long.

What follows is my open letter to Mr. Leary:

I see you have joined the ranks of so-called "celebrity authors" and written a book about your personal philosophies regarding the shortcomings of the human race. For some reason, you seem to believe your fame makes you an "expert" on all things and that you have valid insights on the growing number of autism diagnoses, which have reached what many people have characterized as an epidemic.

Perhaps you haven't heard, but Bruno Bettleheim is dead, and his theories were discredited a long time ago. I realize these bombastic rants are your idea of humor, and while I support your right to say things that expose your ignorance, I feel that as one of these parents you criticize, I have a right to respond.

First, you claim "inattentive mothers and competitive dads" seek an explanation for why their kids "can't compete academically." Most children with autism are diagnosed by the age of three, long before they are asked to perform "academically." In fact, the first thing that many extremely attentive mothers notice is a child's lack of response to human voices. Many initially have their infants or toddlers tested for hearing loss, did you know that? No, I'm quite sure you didn't.

Most of the families I know would give anything NOT to hear the diagnosis of autism. To suggest they actively seek to "label" their children in order to relieve themselves from having to be active, involved parents is--quite frankly--ludicrous. Most of the parents you will meet who are raising children with autism have made enormous sacrifices for the sake of their children. They have taken out second mortgages on their homes to pay for intensive therapies or private schooling. They have postponed their own career aspirations to care for their children's needs. These are not the actions of inattentive parents, I assure you.

Mr. Leary, if you want to use your celebrity to spread hatred and ignorance, I suppose you are free to do so. However, I suggest you remember that the growing number of families you direct your spiteful and uninformed rantings towards buy books.

I'm pretty sure they won't be buying yours.

In fact, I am hoping that not buying your book becomes so prevalent, one might characterize it as an epidemic.

Susan Slaviero
Posted by Susan at 10:10 AM No comments:

It's a wonderful collection of both fiction and poetry that explores wolves and wolf folklore--just in time for Halloween!

I am delighted to have two poems in this issue: "Postmodern Werewolves" & "Little Red and the Robot Wolf"

Thanks for reading!
Posted by Susan at 8:19 PM 2 comments:

poetry, cyborgs, a little something sexy...

I am very excited to be the spotlight poet at Eclectica this Fall!

Get your cyborg on, here.
Posted by Susan at 6:43 PM No comments: