I am thinking about the nature of solitude and wondering if it is quite normal that I don't like to go out too much or talk on the phone at all but prefer to send people goodies in the mail or little random text notes for fun. I am not hypersocial, admittedly. Sometimes, people describe their social lives and I think that sounds exhausting.

I don't want anyone to call me at 10 p.m. and ask me if I want to go out because I probably don't. I want to wear my pajamas and watch movies by myself and maybe scatter some poems out on the floor and put them in some sort of meaningful order. I want to bake elaborate cakes while listening to Nirvana or Bob Marley or maybe Simon & Garfunkel because it reminds me of my childhood. I want to fold towels and putter about the house and rearrange my bookshelves. I don't want to gossip or hang out in bars except perhaps once in while especially if there will be poetry or dancing.

I like to shop alone, eat lunch alone, watch movies alone. There is a small list of people whose company I really enjoy, but that's a sometimes thing. Does anybody else like to do things by themselves? Am I a total crabass or something? I don't mean to be.

I AM looking forward to the Poetry Brothel next weekend because the people there will be awesome and many of us come not as real people but as alter egos, personae. I love this shit. I wish I had an actual MASK or something.

The new manuscript is getting all cross-genre, flash-fiction and whatnot. I'm totally excited about this. I want to write noir-ish crime stories and drink bourbon from a flask. I want to wear a fedora at my desk. I want a black cat named Ghost and a mysterious neighbor that will involve me in some kind of dramatic intrigue.

Things that just don't interest me but seem to fascinate everyone else:

(It's totally cool that most people like things from the aforementioned list. This is not, by any means, a criticism. Just an observation.)

Things that do interest me that nobody wants to talk about:

Exotic Teas and Spices
Cyborgs
Esoterica
Corsetry
Foreign Horror Films
Words People Never Use in Conversation, But Should
The Evolution of Chuck Norris as a Popular Internet Trope
Mythology
Posted by Susan at 12:18 PM 8 comments:

Freud Would Say That Sometimes a Muffin is Just a Muffin.

Last night I dreamt that I was stranded at a bakery. There were blueberry muffins and raspberry-lemon muffins and cinnamon scones with vanilla icing. Yes, they were delicious, but still I did not want to stay. I needed someone to drive me home but had no hope of rescue. It was sad. A sad, sad dream with lovely baked goods.

This isn't particularly interesting, I suppose. It is a departure from my usual dream life, being almost as mundane as my real life. This is where I would sigh if I were speaking aloud.

I am writing a poem that is kicking my ass in a bad way as it is almost what I imagine but not quite there. It involves taxidermy and massive amounts of internet research. Yes.

That's pretty much it. I cut my hair short and most people don't like it but I DO. So there.

I am still propping myself up with strong coffee and my stomach isn't very happy about it but I cannot properly caffeinate my brain without angering my gut. This is a simple fact of my existence.

I need to find some new obsessions. I am tired of my old ones.
Posted by Susan at 1:08 PM 3 comments:

Two new poems in the February issue of PANK.

The Chicago Poetry Brothel is ON. March 5 at the House of Blues: 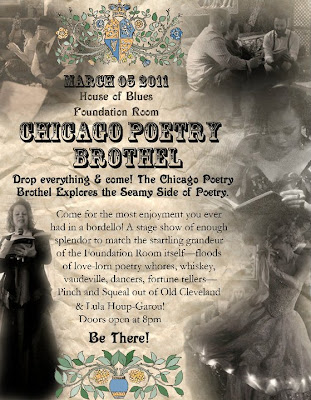 I wrote a couple of new pieces yesterday. I also spent some time watching Picard eat a sandwich and talk about being stabbed through the heart on youtube.

I want to send some things HERE.

This poetry thing can actually be fun, you know.

I cut my hair short and nobody likes it except me. Ha. I need more time so I can bake fresh ginger pound cakes and tiny semolina shortbread cookies with sea salt and maybe an apple pie. This is a lame thing to say but damn I am tired. My feet feel like someone's been pounding spikes into my heels. I should probably buy some proper shoes, not cheapo ones from the discount store (but not walmart as I ABHOR walmart and have not set foot in one for fifteen years, Kay?) as the gel inserts aren't a substitute for good shoes although I had hopes that they would be...

I have my eye on a new corset. With buckles! Very steampunk.

Alas. I will probably buy some practical shoes instead.

Watching: Pushing Daisies
How did I ever miss this? It's freaking fabulous. It's like a dark fairy tale (aren't they all?) with pie.


Feeling: Totally Lame and disconnected from my former Coolness and such
Posted by Susan at 4:30 AM 3 comments:

Notes from my collapsing ventricles:

My new sleep patterns leave me feeling strange and disconnected from my dreams.

We do not typically celebrate Valentine's day at my house. Still, I would love a chocolate cake right about now.

I am drinking coffee and contemplating art for bb which should almost be called the SPRING issue, as the weather is downright balmy and I am perpetually behind schedule.

There is a pot of chili on the stove and there will be warm cornbread with honey and this makes me happy.

I have not worked on my manuscript for two weeks. I need to get back to it, but tend to spend my days off cleaning and resting and whatnot. I cannot afford a writer's retreat but perhaps I can create my own in a tiny room filled with books and silence where I can play with the chimeras in my head. Anything is possible.

Eating: Lots of Cara Cara Oranges, which I don't want to share with anyone, plain bagels with cream cheese.

I had a long elaborate dream about working that actually felt like work and it was followed by a second dream about eating milkshake flavored ice cream with hot fudge sauce. It was really great ice cream, even though it wasn't real.

I am (finally) working on the winter issue of blossombones. All final selections have been made and I'm getting my shit together. I love these poems. Love them. Can't wait for you to read it.


I am feeling reckless. I would like to cut my hair short and wear a vintage dress with a torn hem.
Posted by Susan at 12:25 PM 1 comment: