ROBYN DETTERLINE is the cofounder of Another New Calligraphy, a non-profit organization that designs and handmakes books and CDs for local writers and musicians. Robyn also cofounded Literary Writers Network, was the managing editor of 10,000 Tons of Black Ink, and was an organizer for the Prose Show reading series. She received her B.A. in English and creative writing from Loyola University Chicago, and she now lives in Oak Park with her husband, kitty cat, and the ghost of Frank Lloyd Wright.

BILLY LOMBARDO is the co-founder and Artistic Director of Polyphony H.S., a student-run national literary magazine for high school writers and editors. He was born and raised in Chicago’s Bridgeport neighborhood, home of the 2005 World Series Champion Chicago White Sox. He is the author of The Logic of a Rose: Chicago Stories (BkMk Press, 2005) and How to Hold a Woman (OV Books 2009). His novel The Man with Two Arms will be published by Overlook Press in February 2010. Billy teaches English literature and creative writing at the Latin School of Chicago. He has just completed a YA novella called, The Day of the Palindrome.

WILLIAM SHUNN returns to Tuesday Funk with another installment of his memoir The Accidental Terrorist.

STEPHANIE ANDERSON is the author of The Choral Mimeographs (dancing girl, 2009) and In the Particular Particular (New Michigan Press). She co-edits Projective Industries and lives in Chicago.

SUSAN SLAVIERO is the author of Apocrypha (dancing girl press, 2009) and An Introduction to the Archetypes (Shadowbox Press).
Posted by Susan at 7:42 AM 1 comment:

Back on the grid, perhaps to excess?

I'm even messing around with Twitter again, which is probably the eighth sign of the apocalypse or something.

This weekend I finally (finally!!) bought some chapbooks I've been wanting for ages. Can't wait to read some new poetry!

Mostly, I've been busy helping a few nice folks with their websites and dealing with various household tasks. Once I'm finished, I'm giving my site an overhaul, as it's not been updated in forever and it gives me such a mid-to-late-90's vibe these days... I might even tweak this blog, but it's not super-high on my to-do list right now.

I've also been baking a lot of bread, which is awesome: 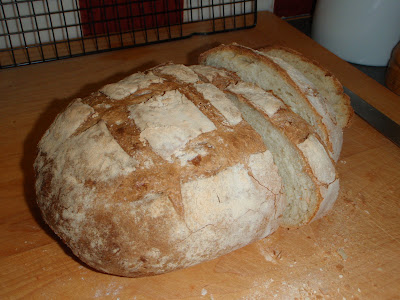 If you've never baked homemade bread, you should try it. It's both therapeutic and tasty.

Due to my recent obsession with all things culinary, I've decided to start building a food blog. It's in the way early stages of construction, though. You can check it out here.

I have plans to pretty the whole thing up soon. I might even try that three column blogging thing, if I'm feeling adventurous...
Posted by Susan at 6:01 PM No comments: